Tasting Highlights' wine reviews are fresh out of the tasting room, offering a sneak peek of our editors' most recent scores and notes to WineSpectator.com members.

Stretching from Santa Barbara County to the San Francisco Bay area, California's Central Coast AVA is one of the most diverse wine regions in the country. Featuring Monterey Chardonnay, Santa Barbara Pinot Noir, Paso Robles Zinfandel and more, this week's selection displays the sheer range of Central Coast wines available. Even better, all ten wines here have earned 90 points or more on Wine Spectator’s 100-point scale, offering some of the best examples from this expansive region.

Santa Barbara is known for its lively and brigh-fruited wines. Take Margerum’s Sybarite Sauvignon Blanc for example; it delivers fresh pomelo, citrus zest and lime leaf flavors on a sleek yet juicy frame. But Santa Barbara is perhaps best-known for its Pinot Noir. Optik’s Bien Nacido Vineyard bottling is a light and piercing version with cherry, blood orange, pomegranate and tarragon notes.

While the warm Paso Robles region is known for Rhône-style wines and Zinfandels, Adelaida has succeeded here with Chardonnay. Vineyards in the Adelaida District AVA benefit from chalk-limestone soils and the Pacific's influence, which causes significant diurnal swings during the summer, allowing Chardonnay to thrive. As a result, Adelaida’s HMR white bursts with stone fruit flavors and butterscotch, ginger and orange sherbet notes.

Moving up Route 101, the Santa Lucia Highlands appellation lies near the coastal town Monterey. Morgan has been making wine in the area since the 1980s, including the zesty G17 Syrah below, a great value at $25. Farther north, Contra Costa County may not be the Central Coast's best-known subregion, but it's notably home to century-old vines. The region's Evangelho vineyard, for instance, was planted more than 130 years ago by Portuguese immigrants. It's the source of the Zinfandel, Mataro and Carignan grapes used by Bedrock winemaker Morgan Twain-Peterson to craft the unique field blend below, which displays rich cherry and orange peel notes supported by lively tannins. 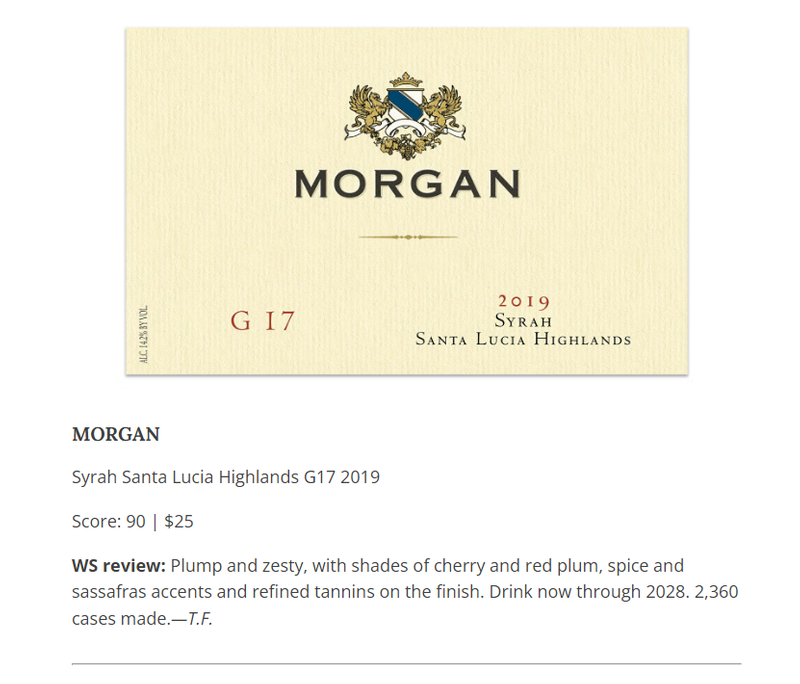 Full article can be found by clicking here.