Dan and Donna Lee have led Morgan Winery since ’82 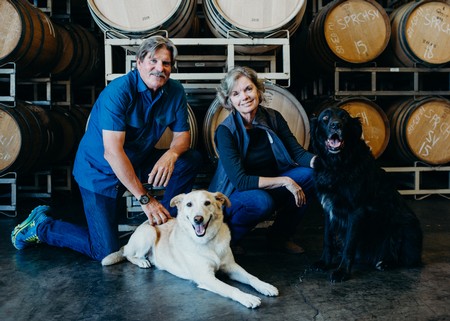 The Californian
By: Tom Leyde

Had it not been for a wine class that Dan Lee took while attending UC Davis, the story of Morgan Winery would be quite different, or no story at all.

Lee, a native of Turlock, was a pre-med/pre-veterinarian student at the time. The wine class piqued his interest. He found it fun and wound up studying viticulture, and graduated from the university’s enology program in 1978. That led to his first job in Salinas Valley with Jeckel Vineyard in Greenfield, where he perfected his winemaking skills.

It also led to a dinner event where he met his life partner, Donna Morgan. She worked in agriculture finance and the die was cast. Morgan Winery was founded in 1982 in a warehouse off Abbott Street in Salinas.

Thirty-four years later, Morgan is a top producer of premium organic California wines. The brand is known throughout the United States, Mexico, Canada and in several European countries. Wine drinkers know that when they uncork a bottle of Morgan wine that it will be a high-quality product.

The Lees are still producing wine in the warehouse where it all started. But things have changed. They now have 25 employees, a tasting room at the Cross Roads shopping center in Carmel and a 65-acre vineyard, the Double L Vineyard, in the Santa Lucia Highlands.

The Double L was named after their identical twin daughters (Double L for double luck), born in 1995. Annie and Jackie are now off on their own. Annie is a graduate of West Point and is serving in the Army. Jackie, who worked for the Society for the Prevention of Cruelty to Animals for Monterey County, is taking up residence in San Francisco.

Founding Morgan Winery was a big risk for the Lees. There was a deep recession going on in 1982. But they were young and ambitious. Family members invested in their venture and they were off, while still working their regular jobs.

“I sold a motorcycle. That was my big contribution,” Lee said with a laugh.

Their fermentation tank was a stainless steel milk tank trailer, and the couple often spent evenings after work labeling bottles at the warehouse.

“That first year was an El Niño year,” Lee said. “It was a difficult harvest. We were sweating bullets.”

The rains produced detritus mold on the grapes, but it actually worked to the couple’s advantage for their first vintage.

“We took barrel samples around to retailers,” Lee said. “We took these little bottles of cloudy wine. People were very gracious, but they said, ‘Why don’t you bring it back when it’s ready.’

“We were naive and young and there was nothing to fall back on,” he said.

But the couple’s persistence and knowledge paid off in gold.

Their chardonnay won a gold medal at the 1983 L.A. County Fair. Then Wine Spirits magazine did a taste-off of the gold medal winners and their Morgan chardonnay won it, receiving a platinum medal. That led to a lot of positive press about Morgan wine.

With that lucky turn of events, the Lees launched the winery with 2,000 cases of chardonnay, and released it at the Monterey Wine & Food Festival at Laguna Seca.

“That was the first time anyone (local) had tasted the wine,” Lee said.

They sold out in a year.

“It was a really exiting beginning” he said.

Eventually, Morgan wines reached the table of then-Gov. Ronald Reagan. When he became president, Reagan had a representative call Lee and told him the president wanted 10 cases for a White House dinner. Lee checked his stock. He had only five cases of wine left and had to tell the president’s man he couldn’t deliver.

“To this day, I think he thinks I was sandbagging,” Lee said.

In the mid-1980s, the Lees changed jobs. Dan went to work for Durney Vineyard and Donna joined Wells Fargo Bank. Their winery output grew to 5,000 cases. They produced pino noir and cabernet and even did some zinfandel. They ventured into syrah and grenache.

In 1996, they bought their ranch. It was bare ground and they planted it in 1997. There are now 481/2 acres in grapes. The couple planted their grapes in a north-south line to take advantage of maximum sun and shade for the grapes. The ranch is certified organic.

“We wanted to be organic from the very beginning … ,” Lee said. “The whole purpose of this is wine quality … It’s the ultimate goal. … We kind of think of the vineyard as a more pure expression of the fruit there.”

The Lees continue to buy grapes from other vineyards to add to the different wines that Morgan produces.

Morgan Winery was named Winery of the Year in 1996 by Wine & Spirits magazine and in 2003 by the San Francisco Chronicle.

After more than three decades in the Monterey County wine industry, Lee has a long view of its history.

“The industry has matured, I think,” he said. “The quality of wine has improved and I think the wine business has become glamorized.”

A number of celebrities have started their own wine labels.

“That has not been real healthy,” Lee said. “I think the consumer is faced with almost overload.”

“I’m still having fun with it,” he said.