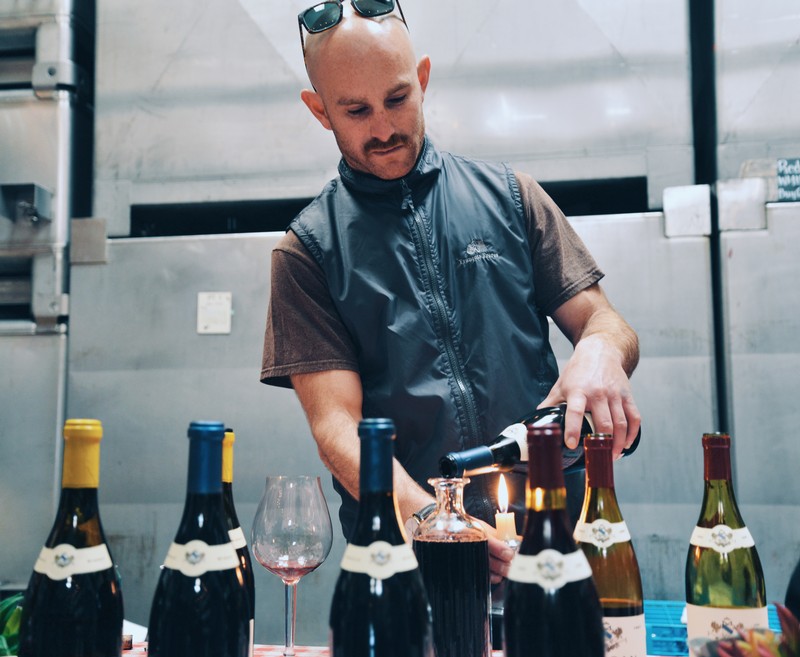 March 8, 2022 – The SLH is rich with storied wine brands, but only a few command consistent and significant presence on grocery store shelves. Morgan is one of them. Started by winegrower Dan Lee and his wife Donna in 1982, Morgan Winery has also been the incubator and training ground for two talented winemakers who have gone on to other great labels. David Coventry, who was instrumental in the development of Metallico, the very spirited unoaked Chardonnay from Morgan, is now at Talbott, after many years of consulting for various brands including Mesa del Sol and De Tierra. Following Dave Coventry at Morgan was Gianni Abate, who was lured away from Morgan to Chalone and subsequently on to other opportunities.

Abate’s departure left the door open for Sam Smith, a UC Santa Barbara alum who spent a semester abroad in Bordeaux, where his fascination with wine soon plotted his life’s path. On the way to his current home base in Salinas, he made Pinot Noir in the Willamette Valley of Oregon and Syrah in the Northern Rhone: two places that solidified his love for cool weather grapes. As assistant winemaker at Margerum, he further explored coastal sites with chill and altitude, giving him the impetus to form his own label that would focus on cool, mountain sites. In 2016, Smith joined Morgan for his first harvest with Morgan Winery, the SLH lodestar.

We caught up with Smith, who also makes Chardonnay, Pinot Noir and Syrah under his own label, Samuel Louis Smith, from a variety of local vineyard gems like Albatross Ridge, Bald Mountain, Coastview and Zayante. He’ll be pouring some of his wines sourced from the Pelio Vineyard, sited near the crest of Laureles Grade, at Soif this Thursday, from 5 to 7pm. Further details at the end of this piece.

EMB: What attracted you to the position at Morgan? How long have you been there now?

SLS: I was attracted to Morgan because it was a great opportunity to work for a historic brand and family-run winery. Morgan is a pioneer in organic viticulture in the SLH, which is really cool. I’ve been at Morgan for six years, so 2022 will be my seventh vintage.

EMB: How well does your winemaking approach mesh with that of your predecessor Gianni Abate? How would you describe your approach?

SLS: There are certainly some similarities, but also quite a few differences. These days, we’re doing less to enhance the already present richness and opulent fruit that we naturally get in the SLH, and utilizing a bit more native yeast and picking a little earlier when possible. Taking all of this into account, I think the wines we’re making now have a bit more lift and charm, and are a bit lighter across the board. That being said, the wines are still indistinguishably SLH.

EMB: Did Dan Lee describe a house style to you that he wanted to preserve? How involved is he in winemaking and blending decisions?

SLS: Yes, there is certainly a house style that we would like to preserve. However, as with everything, there’s always evolution. That evolution is being realized by the approach above. Dan’s not so involved in the winemaking these days, as he trusts me well. In most circumstances, we have a similar vision. Blending, however, is always a team effort.

EMB: How many of the varieties that you are making at Morgan had you made before and which were new to you?

SLS: I had made all varieties apart from Albariño. (Note: This grape is sourced from Cedar Lane Vineyard in Arroyo Seco and was a Silver medalist at the SF Chronicle Competition.)

EMB: Which varieties are the most challenging to make and why?

EMB: Have you altered the use of cooperages since coming aboard?

SLS: Not much. Cooperage selection is one very big way to impact a house style, so it’s no surprise that the oak regimen remains steady as she goes.

You can taste Samuel Louis Smith at Soif on Thursday. Alexis and Dede are thrilled to welcome Samuel Louis Smith Wines and Pelio Estate Winery for a fun tasting on the Soif patio, Thursday, March 10, from 5 until 7pm. Tasting is $25 for the general public, and $10 for Soif wine club members.

Pelio Estate Vineyard is one of Smith’s Monterey sources for his personal portfolio. Planted to Chardonnay and Pinot Noir by the late Peter Figge, it is owned by the Pelio family, who are working on opening a tasting room in Carmel Valley Village. After Figge’s tragic passing, the Pelio Family turned to Greg and Chris Vida to make their wines.  As part of his commitment to cool, mountainous sites, Smith makes both a Chardonnay and Pinot Noir from this vineyard under his eponymous label.

The vines at Pelio Vineyard grow in what was an ancient seabed approximately 12 million years ago. Sitting just 6 miles from the Pacific Smith describes this site as truly on the edge of viticulture.

At the Soif tasting, guests will be able to try two Pelio Vineyard sourced Pinot Noirs side-by-side, made by different winemakers. The opportunity to do this is always enlightening, both for the audience and the presenters alike. How does fruit from the same dirt taste in two different glasses? Only one way to find out. Uncork and taste truth.

Both producers will also be pouring two other wines from their portfolios as well.

Smith told us he calls his 2019 Pelio Vineyard Pinot Noir, “Carmelita.” It is 100% from Pelio. He will also pour his 2020 Chardonnay from the Spear Vineyard in the Sta. Rita Hills and his 2020 Syrah from Coastview Vineyard in the Gabilan Mountains.

EMB: Why did you choose to source from Pelio Vineyard?

SLS:  I chose Pinot Noir from Pelio because the terroir is very interesting and great for growing mineral- and structure-driven Burgundian varietal wines. While retaining good acidity, they also ripen at relatively low potential alcohol. My Samuel Louis Smith brand is focused on organically farmed, mountain sites, and Pelio qualifies.

Pelio Vineyards is located in the hills above Carmel Valley

EMB: How does Pelio differ from the Double L site?

SLS: While both are organically farmed and cool-climate sites, they are very different. The soil at Double L is granitic sandy and clay loams, and while the air temperature is generally a little warmer than at Pelio, it is much windier, so that is a cooling affect that lowers the canopy microclimate and dramatically affects ripening and acid retention. Elevation at Double L is around 500 ft. On the other hand, the soil at Pelio is a very shaley clay loam with some diatomaceous material, resulting from uplifted seabed. The air temperature is generally a bit cooler, but wind plays less of a role. Pelio is at around 1000 ft elevation. Depending on the day, one site may be more affected by marine layer than the other.

EMB: Do you use different coopers or fermentation treatments for the Pelio Vineyard wines?

SLS: There are some overlaps and differences. I use some of the same coopers, but generally select barrels from those coopers that are little more subtle, as that’s what the site requires. I generally pick earlier and use much more whole cluster, in the 50-80% range.

Come taste this special site through the lens of two different wine artists.